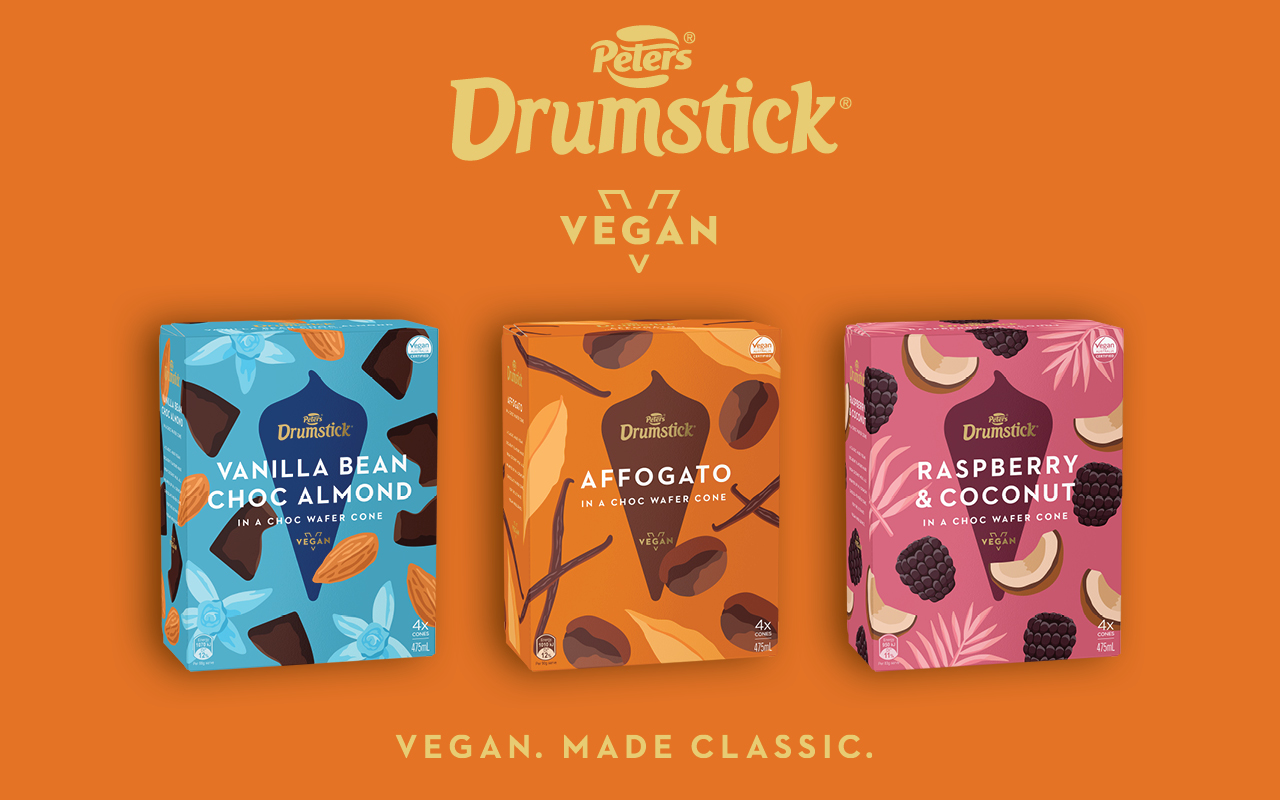 Australia’s number 1 Ice Cream Cone - DRUMSTICK - has once again put a fresh new spin on the Aussie icon by launching a premium range of Vegan flavours.

Cemented in Australian culture and summer memories since 1963, the ice cream fan favourite is meeting the expectations of today’s dessert enthusiasts. Designed for the generation obsessed with plant-based foods, but who don’t want to sacrifice indulgence, DRUMSTICK has created a collection that everyone can enjoy with delicious flavours that challenge the current confines of what vegan ice cream came to be.

“For some time now, we’ve received requests from DRUMSTICK fans to make a vegan DRUMSTICK. With over 12% of Australia’s population now choosing a plant-based diet, DRUMSTICK wanted to offer a broader range of flavours to both vegan enthusiasts and ice cream lovers alike,” said Andrea Hamori, Head of Marketing at Peters Ice Cream. “We heard our DRUMSTICK fans, so we developed this collection for them and for everyone who loves ice cream.”

“Our team of expert food technologists developed a creamy recipe that uses coconut milk as the base, to guarantee a smooth icecream texture that we all expect from a DRUMSTICK. But we didn’t want to just stop at Vanilla. We chose to take this range to another level in terms of indulgence, by adding a crunchy chocolate wafer cone as well as decadent syrups and toppings,” said Hamori.

“We’re excited to certify an iconic Australian brand such as DRUMSTICK for its new vegan range,” said Heath Kilgour, Certification Manager, Vegan Australia. “DRUMSTICK fans can be confident that the new collection meets the strictest standards of certification. New DRUMSTICK VEGAN is another example of brands choosing to provide options to the growing number of plant-based customers, and we are thrilled to certify it.”

The DRUMSTICK VEGAN Affogato flavour will be available in the petrol and convenience channel nationally in a single pack, RRP $4.90.

Peters Drumstick is Australia’s number 1 selling cone and has been
the iconic Aussie cone since 1963.